Durham, NC was the place to be this past weekend (Friday, September 27-Sunday, September 29) for the 6th Annual Art Of Cool Festival also known as the AOCFest! This festival, which features great music, good food trucks,community engagement and sponsor activations, has quickly become the premiere late summer cultural experience that should not be missed!

Since SobeSavvy.com was there to provide local media coverage for the weekend, I decided to make it a workcation and checked into one of the official hotels of the AOCFest. The Aloft Durham Downtown proved to be an excellent choice with its urban style and comfort amenities PLUS it is the closest hotel to the festival’s main venue, Durham Bulls Athletic Park. Guests attending the festival were provided a special group rate if booked in advance. I definitely would plan ahead to stay here next year or anytime you want to Stay & Play in Durham!

The Masonic Lodge is where various DJ parties were being held all weekend in one of their event rooms. DJ RNB was spinning and there was also a bar sponsored by Durham’s own Bedlam Vodka, who I had the pleasure of reviewing and sharing recipes >> here on my blog!

Later that evening, “Cooligans” were seen at the 2019 AOCFest Urban Vendor Market being held on Blackwell Street. Food Trucks along with a variety of vendors lined the closed down area. We had a few delicious shrimp tacos from @shrimptrucknc to fuel us up for the headliners at the Durham Bulls Athletic Park stadium next door.

We also did a little shopping at the 2019 AOCFest Urban Vendor Market and I purchased some organic Shea Butter products from Nailah’s Shea. I also ate chicken and waffles from Big C’s Waffles food truck. We also spotted “Thelma” from Good Times, Bernadette Stanis who had her books for sale and was taking pics with fans!

We arrived in time to see the group Black Violin were on the stage. A duo from Florida, this group takes classical violin training and combine it with a hip-hop twist.

Next up was artist Ari Lennox. She is the first female signed to J.Cole’s record label. Fans got to hear and see her perform hits from her successful album entitled “Shea Butter Baby”. Her creative singing style and bold lyrics energized the crowd. Her future is limitless and as bright as her smile!

Up next was the the incomparable Miss Jill Scott. She has been an entire industry upon herself over the past almost 20 years. Album upon album of iconic poetry tinged R&B songs captured the attention of an entire generation. Her catalog is deep and she did not disappoint. Her stage presence is simply unmatched. She had the crowd in the palm of her hand. We sang the songs with her and just showered her with love and affection for all her music means to us. Great night to kick
off the festival.
https://www.instagram.com/tv/B3DlpUVnDKt/?igshid=1x3mddvoqahze
SATURDAY

A stay at the Aloft Downtown Durham allowed for me to wake up to an awesome view of Diamond View Park at the American Tobacco Campus where Power Yoga, a free community engagement event hosted by The Art Of Cool Festival, was held at 10am & 11am on Saturday. Such a great way to start the day! 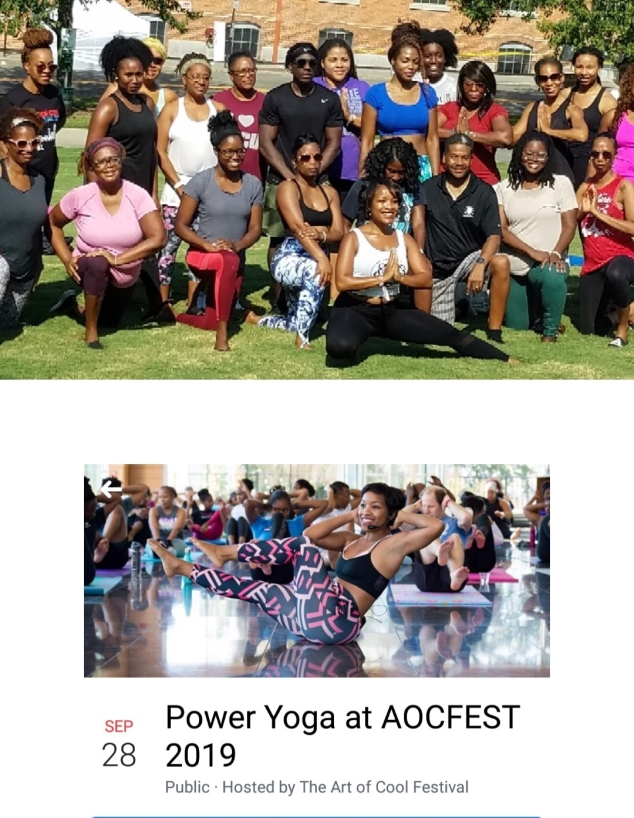 DJ Fatz took us back with a “2Pac vs Biggie” during a day party at Masonic Lodge. He did an awesome job blendiing two titans of rap by mixing their hits back to back. Every lyric to every hit record was sung by the festive crowd. Realizing how we lost both so young was sobering but celebrating their music was inspiring.

https://youtu.be/oO966ZzVbZY
We headed back to the Durham Bulls Athletic Park stadium for a night full of legendary hip-hop featuring
Big Daddy Kane, Whodini and RUN- DMC. Before they took the stage DJ
Skillz showed some amazing work on the 1’s and 2’s. He played everything from old school hip to new school R&B. This man truly is in a league of his own in the DJ world.

Big Daddy Kane feat. The Symphony took the stage looking and sounding amazing! Back like he never left, he
performed as if he has not lost a step. His rapping skills go from fast to slow and he rocked the mic no matter the tempo. He was joined on stage by his Bboy dancer, his little son showed of his moves too, and the legendary Cool G Rap was there for an epic performance of The Symphony. If you ever get a chance to see Big Daddy Kane live you will see there Ain’t No Half Steppin EVER with him!

Next up was the group Whodini, who blazed the stage performing hit after hit such as “Big Mouth”, “One Love”, “The Freaks Come Out At Night” and “Friends”. Lead rapper Jalil did come out in his signature Zorro style hat and the ladies went wild!
By the time RUN-DMC took the stage, the electricity of anticipation was in the air. Rap was still in it’s infancy during the mid 80’s and RUN-DMC almost single handidly was responsible for rap crossing over to
mainstream America. Every successful rapper owe them a debt of gratitude. Time stood still during their set. It was as if they transported all of us back to the 80’s. Their catalog of hit records is immense. They only performed a sampling of them with “King Of Rock”, “It’s Tricky”, “Peter Piper”, “Run’s House” and many more! The crowd showed their love by coming dressed in Adidas, or rocking RUN DMC tees. Even AOCFest was selling “RUN AOC” tshirts to honor the group and he festival. RUN DMC are true icons that are rightly revered as some of the founders of Hip-Hop.

The festival ended on Sunday with a VIP Brunch featuring The Hamiltones that took place at the Durham Convention Center.

If I had one word to describe the Art Of Cool Festival 2019 it would be DOPE! Amazing weekend and phenomonal performances. The AOCFest once again proved that with the right mix of artists and audience, you can expect a dope cultural experience. 👀 Watch my full recap video for more fun highlights

For more information on the 2019 Art of Cool Festival (AOCFest), visit aocfestival.com.

Did you attend AOCFest this year? If YES, who did you enjoy most? If NO, which artist would you have been most excited to see?